“People with integrity walk safely, but those who follow crooked paths will slip and fall.” (Proverbs 10:9 NLT) 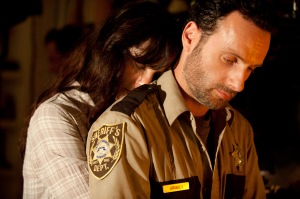 One of my favorite shows on television, as I have mentioned in the past, is the show “The Walking Dead”. Recently, I have been rewatching the series with my wife, as she has never seen it before. This is actually a great way to get more of “The Walking Dead” as I eagerly find myself in the advent of Season 5, which premiers on TMC in October. For those of you who have not watched the show, but might consider watching it, no worries…I will not put any SPOILERS in this, or at least not any that truly matter.

I have found that, on my second time through the series, I am beginning to pick up on things that I totally missed in my first time through. There’s all of the same elements such as zombies (obviously), character development, drama, suspense, humor (though depending on the season, it can be sparing), and action. But, I have noticed more within those elements that didn’t necessarily dawn on me originally. That is the beauty of a well-thought out, well-written script…there is lots of depth.

One of the things I have noticed is how the characters react to circumstances off of their core values. For Rick Grimes, who’s the lead character, his core values follow a more moral and ethical code. In his career, he  was a deputy sheriff who took his job seriously and was a typically honest guy. He’s a guy who values human life, who believes in risking all to help others and believes in honesty.

As Rick and his group go through the trials and tribulations that come with living during the zombie apocalypse, his core values get put to the test. We often like to go through life thinking that there is a right and a wrong, a black and a white, an up and a down; however, in reality, there is often times much more gray and abstract areas, where the discernment process is muddled by the circumstances surrounding us. As Rick’s character develop, we see him go through periods where he is almost at war with himself because the circumstances seem to be calling him to do one thing, but his values are screaming at him to do something completely opposite to that.

In the end, because he is a values driven person, he ends up making decisions that are in line with his core values…even if his first instincts and decisions were against those values. There is a whole host of truths and parallels between this and our lives as Christians. If we are Christian our core values, by necessity, have to be in line with Christ’s virtues of love, joy, peace, patience, kindness, goodness, faithfulness, gentleness, and self-control. Let’s also not forget the virtues of forgiveness, mercy, and compassion. And if our core values are in line with the fruit of the Spirit, we will live our lives accordingly.

So often we allow the world to define what our core values are and that is when we find ourselves compromising on things that go against what we claim to believe. Our challenge, as the church today, is to develop the spiritual discipline to mold our values around the virtues of Christ, around the fruit of the Spirit. If we do that, we will find that those core values will, more often than not, guide us in all that we do. What are your core values and do they line up with the virtues of Christ? These are questions we, as Christians, should be measuring ourselves on a daily basis. I pray that you make this a part of your spiritual journey.

“I hope I shall possess firmness and virtue enough to maintain what I consider the most enviable of all titles, the character of an honest man.” – George Washington

Lord, teach me your ways so that I may build the things you count as virtue into my core values. Let me ever walk in the footsteps of Christ. Amen.