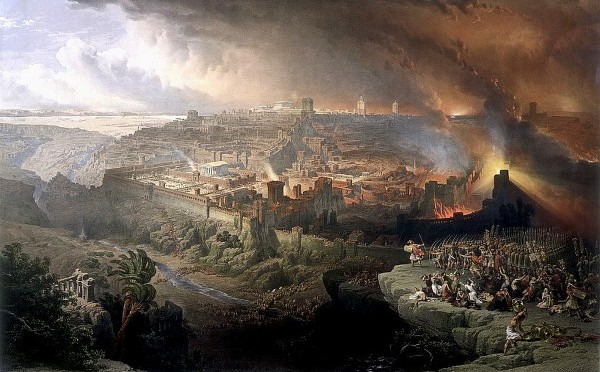 ALSO IN SCRIPTURE
“O Jerusalem, Jerusalem, the city that kills the prophets and stones God’s messengers! How often I have wanted to gather your children together as a hen protects her chicks beneath her wings, but you wouldn’t let Me. And now, look, your house is abandoned and desolate.” (Matthew 23:37-38 NLT)

Jeremiah looked at his beloved Judah, and his beloved Jerusalem, and all he could feel was his anger, his rage toward what it had become. Coming from the tribe of Benjamin, Jeremiah was born in a priestly family and was called by God to be a prophet. Though reluctant at first, Jeremiah soon found that he could not turn away God’s call, for it burned like a wildfire within him.

Jeremiah was called to be a prophet around a year after King Josiah reformed Jerusalem and banned any form of idol worship. The king had tried to bring Judah back to a true and pure worship of God and he established the Temple of Jerusalem as the ONLY temple that God could be worshipped in. Following his death in a battle at Megiddo against Egypt, Judah quickly returned to its wicked ways.

The people of Judah and Jerusalem fell back into idol worship as a result of weak and corrupt leadership. The leaders themselves were corrupt politicians, greedy, murderous, and totally lacking the moral and ethical compasses needed for true leadership. The desparity between the ruling class and the poor grew wider and wider and the shepherds (aka the leaders) of God’s people were more or less wolves in disguise. They weren’t caring for or protecting the people, they were milking and raping them of all they had. What’s worse, the priests and religious leaders were corrupt as well, and supported these elitist, tyrannical rulers with the authority of their religious office. By doing this, the priests were explicitly giving the rulers “God’s blessing” to continue in their corruption.

This incensed Jeremiah. He was furiously beside himself and could not contain the fire that was raging inside. “I’m filled with the Lord’s rage,” Jeremiah shouted, “and am tired of holding it in” (Jeremiah 6:11). In the suggested reading, one sees Jeremiah go through an entire rant about how angry God is and that God would not sit idly by and do nothing in regard to the wickedness of Judah. God was going to bring wrath upon their heads. Their cities would be leveled. Their people would be exiled. Smoke would be seen from miles to remind everyone of what happens when you stray and embrace wickedness. Jeremiah’s rant is harsh, and much of it is spoken as being the very words of God.

Outside of the context, it is very easy for us to read that and take the words literally. In fact, some Christians do believe that God is an angry God who punishes the wicked for their wrong doings. They even wrongfully use such words in judgment against groups of people they disagree with, labeling them as “wicked” and blaming catastrophic events on their wickedness.What’s more, anti-theists will often point to such verses as a reason that religion needs to go. And it is no wonder why, what kind of perfect God throws such temper-tantrums and wipes out entire peoples.

Yet, let us not lose sight that this is Jeremiah speaking. He may be doing so on behalf of God, but he is not God. Let us also not lose sight that Jeremiah is extremely angry, and rightfully so, at the corruption and injustice of Judah’s leaders. It’s not all that different from the anger many are feeling today at the corruption of our American leaders and the injustice that is spreading throughout our land. Jeremiah is, quite frankly, ticked off at this and, rightfully, is pointing out that God is really, really angry too. In fact, God’s anger is what is fueling his anger!

With that said, Jeremiah also provides us words that permit us to interpret this text more responsibly. He words it that way but also proclaims, “Listen, all the earth! I will bring disaster on My people. It is the fruit of their own schemes, because they refuse to listen to Me. They have rejected My word” (Jeremiah 6:19 NLT). In other words, God’s wrath is ultimately the natural and often unintended consequences of evil and wickedness having their effect upon a people who have brought such consequences upon themselves.

As we will see later on, God does not just display wrath but also mercy, forgiveness, redemption and reconciliation. Yet, I do not want to put the cart before the horse. Today’s challenge, then, is for us to reflect on God’s wrath. Reflect on the wickedness in our own hearts, the wickedness in the world, and the evil that is carried out on a daily basis. Reflect on the natural consequences of such wickedness and evil. Read the suggested reading, feel God’s and Jeremiah’s pain, and reflect upon it. Allow it to pierce your heart and move you to change as well as turn you into an agent, a prophet, of change.

THOUGHT OF THE DAY
“This is the very worst wickedness, that we refuse to acknowledge the passionate evil that is in us. This makes us secret and rotten.” – D. H. Lawrence

PRAYER
Lord, help me to move away from wickedness and injustice and to speak out against it as well. Amen.