ALSO IN SCRIPTURE
But He gives us even more grace to stand against such evil desires. As the Scriptures say, “God opposes the proud but favors the humble.” (James 4:6, NLT) 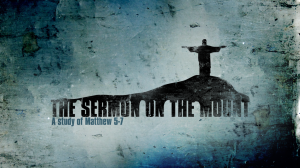 We just made it through our last series, “The Beatitudes”, and now we are beginning an extension of that series, called “The Sermon”. This particular series will helps us to journey back in time to the base of a mount, as we await the Rabbi יְהוֹשׁוּעַ (Yeh-ho-shoo’-ah) to rise and teach to us the word of God. Many of the people gathered around us are more than likely awaiting some sort of proclamation of kingship. Many were hoping that this יְהוֹשׁוּעַ, also known as Jesus, would proclaim himself to be the Messiah, the one sent from God to rule Israel and defeat and destroy all of Israel’s enemies.

We, on the other hand, have hindsight as an advantage over and against those surrounding us. We know that, indeed, Jesus does proclaim to be the Messiah; however, Jesus was not proclaiming to be king of any ordinary, worldly kingdom, but the very Kingdom of God. We have this hindsight, because we are time travelers and we know the outcome of this sermon and, indeed, of Jesus’ life. Yet, this hindsight, as we have gained from Sunday School, Church and/or the Bible, can also work as a hindrance to us in understanding the fullness of what Jesus was ACTUALLY teaching. Thus, we will take many weeks to journey back to the foot of the mount so that we can listen to our Lord’s sermon within the context it was preached.

To introduce this series, let us look back to and recap our previous series on the Beatitudes. As the crowds were gathering around him, Jesus climbed up on the mountainside and sat down. As his disciples sat around him, he began to teach them what we have now come to know as the Beatitudes. What’s more, he began what has gone down as the greatest, and most well-known, sermon of all times.

If you remember, Jesus taugh that the poor in spirit were blessed for the possessed the Kingdom of Heaven. While the impoverised are certainly among those who are “the blessed”, Jesus is also referring to those who do not arrogantly think they are above God’s blessing, as well as those who are not “needy” in the sense that everything is about them and what they need (aka the selfish). The New Living Translation puts it best by paraphrasing Jesus in this way, “Blessed are those who are poor and realize their need for God.” Such people are the true people of God.

Those who hunger, not only for food but for justice, will be satisfied on that day “when Christ comes in final victory and we feast at his heavenly banquet” (The United Methodist Hymnal, pg. 14). Those who are merciful will be shown mercy by God. Those who are pure in heart, meaning those whose heart is solely devoted to God and God’s reign of peace, love, equality and justice, are the ones who see God. Those who work for peace are the children of God. Finally, those who are persecuted for doing what’s right are blessed and in possession of the Kingdom of God. In fact, they should be filled with joy and where persecution like a badge of honor, because people have been persecuted for doing what’s right throughout the ages.

This, I am also sure, is not what many of us what to hear. The reality is that if we are living in a Western society such as the United States of America, we are more than likely either middle-class or higher. Sure there are poor people in America, but most of America has plenty and live life-styles that are centered around self (including family), wealth, and comfort. Jesus’ message challenges us because it forces us to look at our own lifestyles, and our own faith, to discern whether we are truly “poor in spirit”, recognizing “our need for God.’ As we approach this new series, let us let go of our biases and agendas so that our Lord can teach us about God’s heavenly kingdom

PRAYER
Lord, humble me and prepare me for the things you have to teach me. Amen.