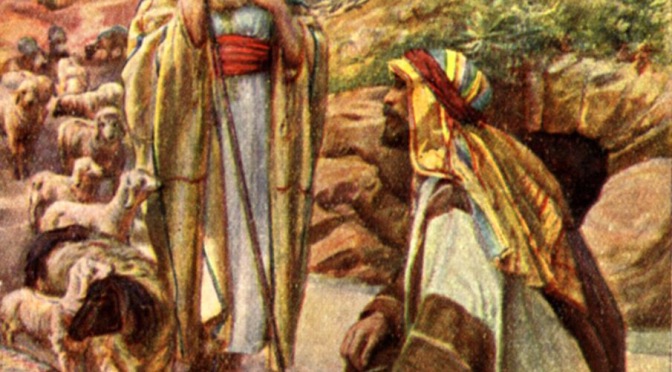 When we think of God’s people, we tend to think one of two things. We might think of the Israelites who were God’s “chosen people”, or we might think of specific characters in the Bible. Either way, we tend to idealize the people we are thinking about. For instance, we may think that God’s people are super faithful, holy, perform miracles and live wholly devout and righteous lives. Unfortunately, this idealism enables us to distance ourselves from being God’s people, because we feel that we fall short of those ideals. As such, I have decided to write a devotion series on specific characters in the Bible in order to show you how much these Biblical people are truly are like us, and how much we are truly called to be God’s people. 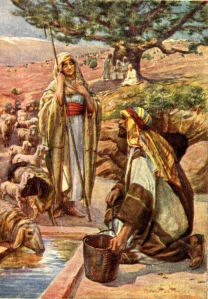 Part 12, Jacob. As was discussed in the last installment of this series, Esau was supposed to be the heir to his father, Isaac’s fortune. It was through Esau that Isaac’s geneology would continue and it was Esau who was to be given the authority of his father as the head of the family. We also discussed how proud and arrogant Esau was. That was certainly his character flaw, and it was a flaw that brought his chance of claiming his birthright right down to a 0% chance.

Esau had mistreated his brother and already thought of Jacob as his servant, because he was the oldest (by mere minutes). He did not regard his birthright as something to be cherished and appreciated; rather, he saw it as something that he was entitled to and did not even consider for a moment that he would ACTUALLY LOSE it to his puny brother Jacob.

Yet, that is exactly what happened. Jacob bid his time and remained humble, despite his brother’s bossiness and boarish behavior. Being a sibling myself, I can only imagine the anger that raged through Jacob everytime his brother ordered him around, but he was humble and listened to his mother’s advice to wait for the right moment. That patience certainly paid off in the end.

Yet, it would be a mistake to think that Jacob was wholly innocent in this situation. He absolutely was not. There is a difference between being humble for humility’s sake, because one knows their place and appreciates all that has been done for them. It is entirely different to assume humility in order to lay claim of something that one is scoping out all along. Jacob definitely falls into the latter category.

Make no mistake, Jacob did not have altruistic reasons for being humble; rather, he was born into a status of humility and used that to his advantage in winning out over his brother. He played well the part of the meek and humble servant, so well that not even his own father thought that Jacob would do what he was about to do. He was a thief lying in the dark waiting for the right moment to take his own brother and father by surprise.

When it became abundantly clear that Jacob would not receive the coveted birthright by his father choosing him over Esau, he followed his mother’s lead in disguising himself as Esau in order to trick his blind and ailing father. Covering his arms with animal hair, he went to his father as Esau and asked his father to give him his blessing now. Even though his voice was different than his brother’s, his father fell for the trick because his arms felt like Esau’s. Thus, unwittingly, Isaac gave Jacob the blessing that was meant for Esau, and Jacob became heir to his father’s fortune, and the head of his father’s family.

This act of betrayal led to much dismay in the family, so much so that Jacob ended up fleeing the camp for his life. Esau was so enraged to hear that his brother had stolen away his birthright that he sought to kill Jacob. Because of his sinful deception, Jacob did not receive his inheritance for at least 14, but probably closer to 20, years later; rather, he spent those years in hiding in a foreign land in the househould of Laban.

Again, the Bible does state that God gave Rebeka a revelation that her youngest son would inherit Isaac’s household and fortune; however, it is hard to imagine that God wanted Jacob to pull that off in the way he did, taking matters into his own hands. Because he did things his own very dishonest way, he paid a bitter and long price. It was a good thing that Jacob was blessed with having the virtue of patience, because was really going to need it right down to getting a wife.

Have you ever been dishonest because you felt that it was the only way to make things go good for you? Have you ever cheated or cut corners to bring about what you felt God wanted you to do? Have you ever had to wait even longer for what was reward was coming to you as a result of your actions? As can be seen in the story of Jacob, it is always better to trust God and allow God to work, than taking matters into one’s own hands to force what God is ultimately doing anyway.

“There are no shortcuts in life – only those we imagine.” – Frank Leahy

Lord, keep me honest, even when my anxieties and anticipations dictate dishonesty. Amen.