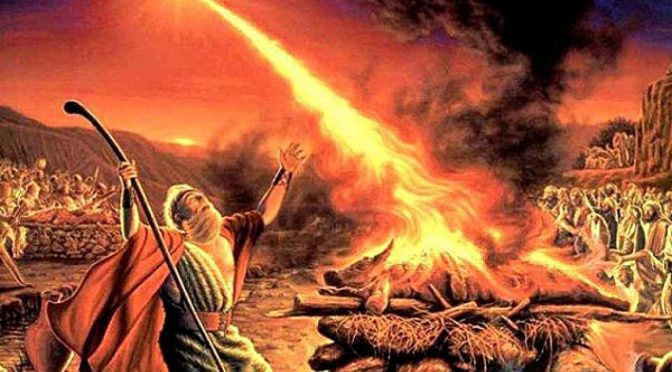 ALSO IN SCRIPTURE
“For before John came, all the prophets and the law of Moses looked forward to this present time. And if you are willing to accept what I say, he is Elijah, the one the prophets said would come.” (Matthew 11:13-14 NLT)

Part 71: Elijah. As was mentioned in the last devotion, not all of the people in Israel were disobedient to the LORD. As we know, this is true of any nation or kingdom. Just because the leaders are wicked and evil, does not mean that all of the people they rule are evil. Certainly, many followed the example of their leaders, which is always the case; however, there were some who stood up to them and held them accountable in the name of the living God.

Elijah was the greatest among the people who stood up to King Ahab and Queen Jezebel. So great was he, that he became known as the prototype for the one who would pave the way for the coming of the Messiah. For Christians, of course, the precursor to the Messiah was an obscure prophet named John the Baptist. The Baptist dressed like Elijah, ate like Elijah, and lived like Elijah out in the barren wilderness. What’s more, like Elijah, he stood up to King Herod calling all of Judea, and its leaders, to repent and turn back to God.

But before we talk about John the Baptist, who will come much later in this series, we should first look at Elijah, the prophet who taught the wicked king and queen of Israel what it meant to bow in fear before the LORD God almighty. Elijah, also called Elias, means “My God is YHWH (pronounced Yahweh)”. YHWH is the name given to the Hebrew God of Israel; however, it is also a title and is often translated as LORD in English. Thus, Elijah means “My God is YHWH” or “My God is LORD”. Either way, Elijah’s name was fitting for the prophet who bore it, for he worshiped YHWH as LORD and stood against the cultic Baal religion of the northern Kingdom of Israel.

At one point, Elijah being the only remaining prophet of YHWH still alive (the others were slaughtered by Ahab and Jezebel), the great prophet stood in opposition to 450 of Ahab and Jezebel’s prophets of Baal on the top of Mt. Carmel. In what could only be described as Hollywood EPIC, Elijah taunted the prophets and dared them to call upon Baal to accept their offering and save them. When nothing happened despite their efforts, Elijah called upon the LORD, who sent fire from the heavens to consume his altar saturated with water. Nothing was left. Following that Elijah directed the crowds witnessing the event to capture and slaughter all 450 of those prophets.

Elijah was known for that epic battle, as well as for resurrecting from the dead the son of the widow from Zarephath through the power of God, and for many other miraculous deeds; however, even still, he was afraid for his own life and often found himself fleeing out into the wilderness in fear that the king and queen would have him killed. In one such scene, God asks him why he is hiding on Mount Horeb and then sends fire, and wind, and earthquakes and other things, yet Elijah could not find God in such things. Finally, Elijah discovers God in a still, quiet voice that called out to him like a gentle breeze.

Here was God’s greatest prophet to date, who had stood alone against 450 maniacal prophets of Baal, and he still didn’t know the stillness and the peace of God. He was looking for God in fire, and power, and in the forces that shake the world; however, in this moment, God was showing that God was none of those things. God was a soft, gentle, whispering breeze of a voice and God was PRESENT there with Elijah in his fear and trembling. It’s as if God was telling Elijah, “Be still and know that I am God” (Psalm 46:10).

How many of us are like this? How many of us look for God in all the wrong places and, when we don’t find God there, how many of us get caught up in fear and trembling, thinking that we are alone? Hear God’s voice calling out to you in the gentle breeze, “My child, be still and know that I am God.” Feel the spirit, the breath of God breeze by you softly, filling you with a peace that passes all understanding. Your God IS LORD and the LORD is with you!

THOUGHT OF THE DAY
O LORD, answer me! Answer me so these people will know that You, O LORD, are God and that You have brought them back to Yourself.” (1 Kings 18:37 NLT)

PRAYER
Lord, fill my heart, my soul, and my mind with your presence so that, in you, I may hear your still, quiet voice. Amen.