ALSO IN SCRIPTURE
“Stay alert! Watch out for your great enemy, the devil. He prowls around like a roaring lion, looking for someone to devour.”  (1 Peter 5:8 NLT) 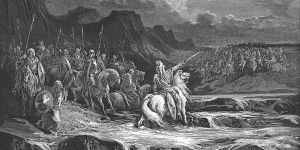 Part 120: Hasmoneans. Hello time travelers! Welcome to the first century CE (Common Era…aka A.D.), the world in which Jesus and the disciples lived and did ministry. Before we can truly understand the New Testament world, it is important for us to have some of the context. The next several devotions will hopefully provide some of the historical contexts that illuminate the world in which Jesus and his disciples lived.

Following the return from exile, the Persians continued to have a hold on Israel until the Greeks, under the reign of Alexander the Great, conquered the Persians. Over the period of thirteen years, Alexander went from being the King of Macedonia to uniting the Greek city-states into one kingdom and conquering the known world between Greece and India. Yes, you read that right. His empire expanded to India.

Once Alexander died, his death is somewhat of a controversial mystery, his unified empire split up into opposing factions led by commanders and officials. One of those commanders was Seleucus (pronounced sel-oo-kos), an infantry general in Alexander’s army. He went on to form and rule the Seleucid Empire, which was made up of Persia, Judea, Anatolia, Mesopotamia, and what are now Cyprus, Israel/Judea, Iraq, Jordan, Lebanon, Palestine, Syria, Turkey, Kuwait and parts of Pakistan and Turkmenistan.

Under the Seleucid Empire, particularly during the rule of Antiochus IV, the Jews suffered terrible oppression. The Temple was defiled by Antiochus who put statues of Greek gods in it to be worshipped and the practice of Judaism was outlawed. This was a part of a campaign to further Hellenize the Jews (e.g. to make them more Greek-like). There were “progressive” Jews that sided with Hellenization and thought that Judea needed to get more with the times. These Jews had much to gain from Greek culture. Others, who were much more conservative or “traditionalist”, rejected the push for Hellenization.

When Antiochus IV persecuted and the Jews and banned their religious practices, the Mattathias and his sons killed a Hellenized Jew who was about to make a sacrifice to an idol. A year later, his son Judah Maccabee led an army of Jewish insurgents in an uprising against the Seleucid occupiers. The ensuing revolt and/or war lasted seven years. Though Judah was killed, the Jews under the leadership of two of Judah’s brothes, were able to win independence.

With that said, the way they won independence was through a “deal with the devil” so to speak. They ended up signing a treaty and a (sort of) alliance with Rome, where Rome would attack anyone who waged an attack on Judea. This alliance allowed them their independence and the Maccabees went on to become the rulers of what became known as the Hasmonean Dynasty. While this alliance worked in their favor to begin with, eventually that same “ally” would conquer them and put Judea through an oppression it had never endured before. In fact, the effects of that oppression is still felt by Jews around the world today.

We all should be honestly reflective on this and also weigh the potential consquences that are mounting up against us as a result of such bargaining. Such reflection will hopefully bring us, individually and collectively, to repentance and back toward faithfulness to God. I pray that we all take this seriously and cut our ties with the devil.

THOUGHT OF THE DAY
The devil is always in the details, often times in the smallest print.

PRAYER
Lord, you know the right course for my life. I place my trust in you, and you alone, to guide me toward righteousness. Amen.