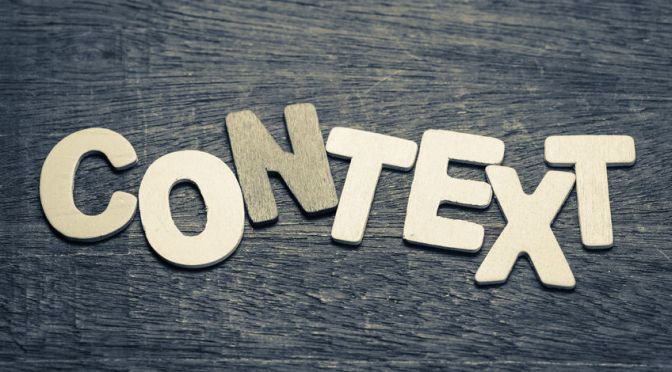 ALSO IN SCRIPTURE
“Open my eyes, so that I may behold wondrous things out of your law.” (Psalms 119:18)

On the one hand, the Bible does say such things. The words “there is no God” can be found in Psalm 14:1; the words “everything is meaningless” can be found in Ecclesiastes 1:2 and elsewhere in Ecclesiastes; God wishing people to remain slaves can be found in Ephesians 6:5, Colossians 3:22, Titus 2:9-10, and 1 Peter 2:18. That God punishes the descendants of sinful ancestors is found in Numbers 14:18, among other places. That women are inferior to men, are to be silent in churches, are not fit to teach and are saved through child bearing can be found in 1 Timothy 2:11-15.

On the other hand, each one of these verses has something in common tying them together. That common thread is that they’ve all been taken out of context, perhaps in different ways, but they are definitely all out of context. In Psalm 14:1, the Psalmist is ACTUALLY saying that “the fool says in his or her heart that ‘there is no God.'” The words “there is no God was taken textually out of context. Ecclesiastes 1:2 is the opening to a philosophical treatise on how life, and all of its trappings, leads to emptiness and that, at the end of the day, people need to “fear God and keep his commandments” (12:13). While Ephesians and Colossians do state that slaves are to obey their masters, the historical context of this passage shows us a Christian community that is reacting to accusations that Christians are inciting slaves to riot against their masters (which was one of  many accusations that Romans were levying against Christians of the time period). That doesn’t justify the passage, but helps us understand it so that we don’t fall into the same trap.

It was a common tone in the ancient world that if you make God angry, God will punish you. Some of these texts were written in times of tribulation, such as the Babylonian Exile where people were wondering why they had been exiled to begin with. What had they done to deserve such an awful fate…or what had their parents or their parents’ parents done? This understanding is less “God’s word” as much as it is people grappling with their circumstances, though there certainly are many unintended and far reaching consequences to sin. And the bit on women is also a reaction to the fact that women, up until that point, had played prominent roles in the church (e.g., Romans 16:1-4, 7) and the Romans were levying that against Christians as yet another example of how Christians were vile and against Roman order.  Again, this historical context (plus Paul’s commendation of women leaders) helps us to discern and affirm that indeed God DOES call women into ministry and leadership, and that they are saved equally and in the same manner that all human beings are: through faith (Romans 3:19-25; Galatians 3:28).

This is not an exhaustive discussion of those particular topics, but hopefully makes the point that CONTEXT IS EVERYTHING. The Bible is THE MOST IMPORTANT, and INSPIRED, source of our faith; however, it can be made to say anything when the context (textual, socio-economic, and/or historical) is missing. Don’t just read your Bible, but study it. Get into a good Bible Study that dives deep into the texts and gives you a good foundation not only on what the Bible says (keep in mind that we are not reading it in its original languages), but the context behind what it says. Buy books that delve into the Bible and provide the context behind it. Today’s challenge is for you to begin to not only read the Bible, but to build up a solid means of understanding it so that you can relevantly apply it to your life in a way that is true to the Spirit of the Word.

THOUGHT OF THE DAY
“Context is worth 80 IQ points.” – Alan Kay

PRAYER
Lord, guide me in my studying of Scripture so that I may grow, not just in knowledge but also in understanding. Amen.

One thought on “A LOOK BACK: Context is Everything”