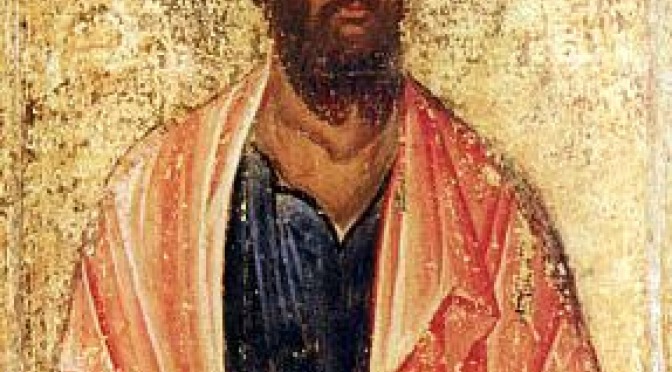 Part 252: James the Just. Admittedly, there is often a confusion that arises when discussing some of the people in the New Testament due to the fact there are multiple people with the same name. Simon, for instance, could be Simon the Zealot or Simon Peter. Judas could be Judas son of James or Judas Iscariot. Mary could be any number of Marys, including but not limited to Jesus’ mother, Mary Magdalene or Mary, sister of Lazarus.

The same is true when it comes to James, who could be James, son of Zebedee, James son of Alphaeus, James father of Judas, or James, half-brother of Jesus of Nazareth. In today’s devotion, James, the brother of Jesus, will be discussed. He is also known as James the Just; however, before learning how he came about that descriptive title, let us first explore what we know of him.

Very little is written about James in the Bible; however, we can gather much about him from what little we have. First, he was not always a believer in his brother Jesus. Mark wrote in his Gospel that Jesus family, including James, thought Jesus was outside of his mind early on in his ministry and they sought to “take him away”, in order that they could silence him and keep him and their family out of trouble (Mark 3:21, 31-35).

The next we hear about James is in the Acts of the Apostles written by Luke. By that point, James is not just a believer in his brother, he’s one of the leaders and pillars of the Jerusalem Church. What can be gathered, though nothing is specifically written about it, James and his family did eventually become believers in Jesus. We all know that Mary, mother of Jesus, was one of the people was at the cross of her son, and that she carried on in the life of the early church, along with Mary Magdalene and the other women followers. We can, therefore, safely presume, that most if not all of Jesus’ family followed her lead, including James.

In 90 A.D., Flavius Josephus made reference to “the brother of Jesus, who was called the Christ, whose name was James” (Anitquities of the Jews, Book 20, Chapter 9, 1). In that account, the High Priest, Ananus son of Ananus, had James and some others arrested, tried them as law breakers, and had them stoned to death. What is striking is that the entire Jewish community seemed to be in an uproar over that decision because James and those were considered to be “the most equitable citizens, and such as were the most uneasy at the breach of the laws” (Antiquities of the Jews, Book 20, Chapter 9, 1).

This extra-Biblical account is actually corroborated by what we know of James through the writings of Luke and Paul. We know that James and the Jerusalem Church were concerned with not breaking the Jewish law and challenged Paul in how far he should go to open up the covenant to Gentiles. James’ followers seemed to counter Paul quite a bit in his Gentile mission (see Galatians). In fact, it was James who turned down Paul’s collection and suggested he use it at the temple to show that he, as a Jew, still followed the Jewish law (Acts 21:17-40).

This is, in fact, how James came to be known throughout Jerusalem as James the Just, or, perhaps better translated as James the Righteous. Though he was a Christ follower, he was respected in the Jewish community as a devout Jew and follower of the Torah. That is why the community was outraged by his death and why Ananus got demoted and replaced as high priest (ironically by another man named Jesus).

The first thing that should challenge us about this is recognizing the inherent Jewishness of Jesus, James, Paul and the earliest church. At that time, there was no such thing as a separate religion called Christianity. The term Christian originally was meant to describe Jewish followers of Jesus the Christ. The original name for this Jewish sect was “The Way.

Secondly, we should recognize that Christianity has always been in the midst of give-and-take, when it comes to theology and inclusion. If it were up to James, God bless him, the chruch would have stayed in and around Jerusalem and, more than likely, it would have been eliminated in 70 A.D. with the destruction of the city and the temple. Because of Paul, Luke, Peter, and others, the Gentiles were eventually included. In fact, over time, the Gentiles became the majority.

As Christians, we should be pushing the boundaries of who we include as well. Christ did not come, nor die, to save the righteous, but to save sinners (of which we all are). With that said, we should also respect and honor those Christians who hold to a more conservative view, such as James did. Paul brought him a peace offering, even though the two vehemently disagreed. Paul also went to the temple to honor James’ wishes, which led to Paul’s arrest. Paul’s example should remind us that in Christ, we are all one (despite the fact that we don’t all agree). Let us be mindful of that now and forever. Amen.

THOUGHT OF THE DAY
“After the apostles, James the brother of the Lord surnamed the Just was made head of the Church at Jerusalem.” – Hegesippus, 2nd Century Bishop of Jerusalem

PRAYER
Lord, help me to stand firm in my beliefs, all the while humble and loving toward all my brothers and sisters in Christ in my heart. Amen.