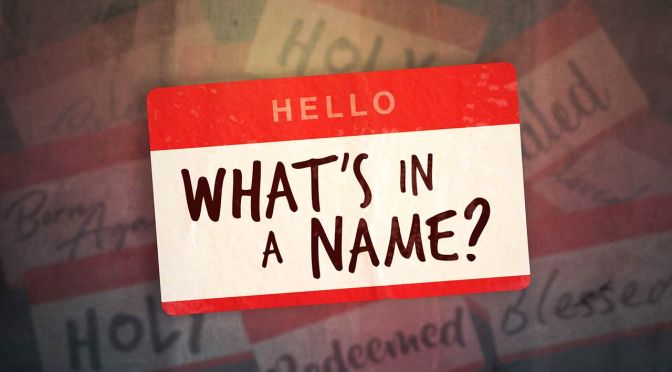 ALSO IN SCRIPTURE
“But now, O Jacob, listen to the LORD who created you. O Israel, the One who formed you says, “Do not be afraid, for I have ransomed you. I have called you by name; you are Mine.” (Isaiah 43:1 NLT)

Have you ever given much thought to your name? Just the other day I was in a conversation with someone who was talking about how her granddaughter just started to write her own name. Instantly, I was transferred back to when my daughters were first able to write their own names. I remember what a milestone it was to see them do that. What’s more, this conversation also caused me to reflect on my own name, and the moment I was first able to write it. Indeed, I am not sure I remember when I first was able to write my own name. I definitely remember learning to write, and then learning to write in cursive, but I am not sure I remember when I first wrote my own name: Todd.

The truth is, I am not sure I can fully answer that question. My name is Todd because my parents chose to name that. The name Todd actually comes from my dad’s side of the family. I was named after my grandma’s maiden name. Her name was Jeanette Elizabeth Todd before marrying my grandfather and becoming Jeanette Elizabeth Lattig. For the first few months, I had no self-awareness of any  name. Over time, I learned that those people who are always holding me and feeding me call me “Todd”. Eventually, at some point, I started answering to that name and claiming it to be my own. No doubt, if someone asked me when I was a Toddler (ironic…I know) what my name was, I would say, “My name is Todd.” And eventually, I began to write my name as a way of marking whatever I was writing it on as being “mine.”

So, here it is that I am, indeed, a Todd. But what does that say about me beyond what name I go by? In reality, we are so much more than our names; yet, truth be told, we invest all that we believe we know about ourselves into those names. And others do the same. If you were to ask one of my family members or friends who Todd is, they would no doubt shower you with all they thought that I am. But that would be who they believe this Todd to be…that would say nothing about every other Todd out there.

While we may identify ourselves by our name, and while we may associate our characteristics, strenghts, flaws, personalities and other things with that name, the truth is that our names do not really define us or who we are. Rather, God does define who we are and calls us according to that definition. So whoever you, the reader, are, you are so much more than the name and all the things that you attribute to that name. You are more than you could ever imagine. No matter how well you think you know yourself, and no matter how much others think they might know about you, God is the only one who knows EXACTLY who you are and all that you are capable of. God knows your possibilities and your full potential…and God is calling you, not only by NAME but according to WHO YOU ARE, to reach your full potential. All you need to do is TRUST IN GOD, and take the step forward to answer that call…knowing that God will guide you each step of the way.

THOUGHT OF THE DAY
“Do not let your hearts be troubled. Trust in God; trust also in me.” – Jesus of Nazareth, John 14:1

PRAYER
Lord, reveal to me who I really am and guide me to what it is I am really called to do. Amen.