ALSO IN SCRIPTURE
“God blesses those who are poor and realize their need for him, for the Kingdom of Heaven is theirs.”  (Matthew 5:3, NLT) 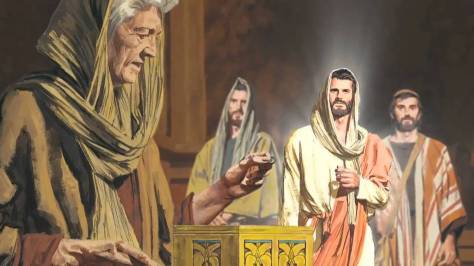 Part 205: Poor Widow. If there is one thing that is consistent about all accounts of Jesus in the Gospels, it is that he consistently showed favor and deference to those who were “the least of these.” We need to be careful in how we read/hear that. I am not saying that “the least of these” were always the poor, the homeless, the oppressed, etc. To read that into it would be to expose our own biases. Some of the richest people can be “the least of these”.

We have already seen cases of that in our readings. In fact, it is safe to say that being rich can really be a place of spiritual and emotional poverty. Jesus recognized this and when that type of the “least of these” were humbled by that poverty and realized their need for God, Christ brought healing and wholeness into their lives as well. What we need to remember is that “the least of these” come in every shape and size; there is no “one size fits all”.

What’s more, in all cases it is humility that leads to healing and wholeness. Rich or poor, the proud always find themselves in a place of needing to be humbled, whereas those who are humble recognize their need for God. We certainly see this in the poor widow, whom Jesus observes giving the last bit of money she has in order to tithe. In reality, she does not tithe for a tithe is merely a tenth of what one possesses. This woman gave 100%, even though she needed it for her own sustenance.  Think about the kind of faith that she had to give the last money she had to God. That is why Jesus highlighted what she was doing and honored her gift with his words to his disciples.

But Jesus’ teaching to his disciples was not meant to just highlight the poor widow. It would be easy to prop her up as the “the least of these” and dismiss the other reason for pointing her out. In fact, while this woman was certainly the “least of these” in terms of her finances, she was actually the “greatest of these” spiritually speaking. Make no mistake, in terms of her faith and stewardship, this woman was embodying the kingdom of Heaven.

This should challenge us to learn from Jesus’ comparison between the “poor” widow and the obligatory tithers. It should challenge us to find be in a place of humility when we self-reflect in what ways we truly are “the least of these” in need of God’s hope, healing, and wholeness. Do we give of what we have out a sense of obligation or out of joy and gratitude toward what God has given us?

Everything we have is a gift from God. The poor widow understood that and gave all that she had back to God, trusting that God would not fail her nor forsake her.  We are being called to see everything we have as a gift from God, rather than looking at what we have as OURS to give. After all, what is truly ours when our very lives were given to us by the One who created us and has redeemed us through the immeasurable sacrifice of death on a cross? Let us be like the poor widow and celebrate our LORD through generous, joyful giving!

PRAYER
Lord, help me rid myself of the ways in which I am impoverished. Help me to store up my treasures in you. Amen.