ALSO IN SCRIPTURE
“Don’t you realize that your body is the temple of the Holy Spirit, who lives in you and was given to you by God?” (1 Corinthians 6:19a, NLT) 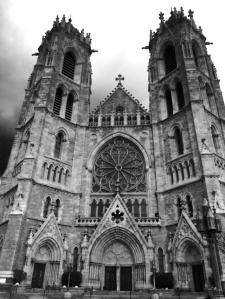 Just the other day I had an opportunity to stop and see the Cathedral Basilica of the Sacred Heart in Newark, NJ with a group of friends. The building was brilliant and awesome. I am huge fan of gothic architecture and this particular cathedral takes the cake in New York/New Jersey Metropolitan area. Yes, I have visited Saint Patrick’s Cathedral; however, the Cathedral Basilica of the Sacred Heart stands on its own without other buildings taking away from it’s immensity and beauty. The saints and gargoyles guard and protect the building and, standing at it’s base, the building ironically reminds me of Martin Luther’s hymn “A Mighty Fortress is Our God.” This place, even on the outside, feels like it would be a sanctuary on the inside.

So, naturally we decided that we would take a walk inside to see its beauty from within; however, as we approached the doors and began to pull on them, we found them to be locked! Bummer. We really, really wanted to see the inside of it…but we were barred from entering. This took me by surprise as every Roman Catholic church I had ever been to had always been open for people to come in, pray, meditate, confess, etc. Yet, these doors were locked and we were not able to enter into the sanctuary within.

When talking with a fellow colleague the following day, I was reminded that the Cathedral Basilica of the Sacred Heart was located in Newark, which is a major city that has, whether right or wrong, been known for it’s crime. Now, I am not sure if that is the reason the doors were locked or not, and another colleague pointed out that if we went one of the other side doors and knocked someone would have let us in, but the fact remains that the doors were locked and that was enough to turn us away.

While I am certainly not blaming the cathedral caretakers for locking the doors, I see a powerful metaphor here that can illumine our own lives. According to Paul, our bodies are to be God’s temple. We, as God’s children were created to be sanctuaries. The church, not the buildings but the people of Christ, was called to be a sanctuary of hope, healing and wholeness for all who seek refuge; however, often times, the church finds itself weathered and beaten. We find ourselves being reshaped by the experiences of the world that surround us in our daily lives and, as a result, we become more like a locked fortress than an open sanctuary.

What’s important to stress here is that the church is not called to be a fortress; rather, the church (meaning the people of Christ) are called to be living and breathing sanctuaries. We are called to be open. If we look at the aforementioned hymn by Martin Luther, we will notice that GOD is our fortress. GOD strengthens and fortifies our hearts so that they won’t be changed by the weathering and beating that the storms of the world so often cause in us. The fact of the matter is that if we have become fortresses on the outside, it is because the world has hardened us on the inside.

We are called to be LOVE on the inside. If we have faith in God, if we trust in God to be our fortress, then we have nothing to fear in remaining open as a sanctuary for others. God will not abandon us and God will protect us from the weathering that tends to lock us up into stone fortresses. All we need to do is remain open to God, who will lead us to be open sanctuaries for all who are weary and heavy laden. Have faith in God and be the sanctuary you have been called to be.

THOUGHT OF THE DAY
“Come to Me, all of you who are weary and carry heavy burdens, and I will give you rest.” – Jesus of Nazareth, (Matthew 11:28 NLT)

PRAYER
Lord, re-enter into my life and secure me in your love. Give me the peace and the foresight to open myself to others in the same way that you have opened yourself up to me. Amen.