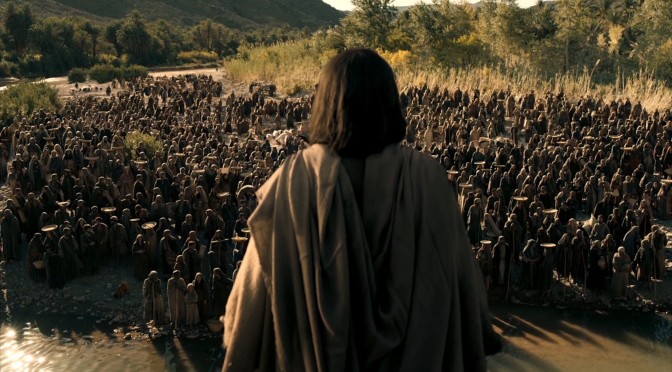 ALSO IN SCRIPTURE
“Yet the time will come when Israel’s people will be like the sands of the seashore—too many to count! Then, at the place where they were told, ‘You are not My people,’ it will be said, ‘You are children of the living God.’” (Hosea 1:10 NLT)

It was high noon as the sheriff stepped off of the the old, dried out, wooden deck of his office and onto the dusty road of the town. He faced the outlaw with a certain steadiness in his eye, a determination to put down this cold-blooded, no good, double-crossin’ rattlesnake before he caused anymore problems for the citizens of Tumbleweed, NM. The Sherrif slowly brushed his black trench coat back on both sides, showing the peacemakers he had holstered to his hip. The other man flinched, and before he could even take a breath, the lawman’s peacemakers rang out with bullets blazing. That outlaw would never be disturbing the peace of Tumbleweed again.

Often times, when we hear Jesus say, “Blessed are the peacemakers”, we think in terms of the sheriff above who was certainly “making peace” for his town by ridding it of troublemakers and outlaws. We think of our military, the police officers, and other first responders who keep the majority of people in our communities safe from criminals and others would “disturb the peace. We also think of pacifists and people who refuse to partake in any sort of violence.

Yet, while both of these understandings certainly embody an aspect of “peacemaking”, none of them captures what Jesus is actually refering to in his beatitudes. First, it is important to understand the historical and political contexts in which Jesus is living. In the first century, the Jews found themselves under Roman occupation and they were quickly being “converted” to a Greco-Roman society. There was great pushback against this and many groups, including zealots and others, violently resisted such occupation. Yet, Jesus’ message was not merely against those groups’ violent action against Rome, as it is sometimes portrayed.

Much more than that, this was a political statement against Rome itself. After all, the Roman emperors called themselves “peacemakers” and “Sons of God.” It was the Roman Emperor, and by extension the empire’s legions, that peacemaking was done. The Zealots, the Essenes, the community at Qumran, and many more were put to death by the Roman sword or the cross. If one didn’t live peaceably under Roman rule, then one found a sharp and painful end to their unwillingness to conform. This was what Rome considered to be “peace” and they spread their pax Romana (Roman peace) throughout the known world.

With the spread of terrorism, violence in our own communities, and on our own streets on the rise, many today are calling for peace by force. They want their streets safe again and they want someone to enforce “law and order” in order to ensure that “peace” is ruling in the streets. The question is this, peace for who and at what cost? Is this what Jesus meant when he said, “blessed are the peacemakers for they will be called the children of God.” Does God force into peace, or does God strive to reconcile us with each other and with God in order to attain God’s Kingdom of peace here on earth as it is in heaven?

It is important to understand that when Jesus states, “Blessed are the peacemakers,” he is not referring to governmentally or civilly enforced peace, nor is he referring to a passive attitude toward violence and/or others. On the contrary, being peacemakers is the actively engaged, and difficult, work of bringing reconciliation into our communities. Those who seek to bring reconcilliation between people/communities and their neighbors, as well as reconciliation with God, are the ones who are called the “children of God.

What this means is that anyone who wishes to follow Christ must be an agent of God’s recociliation.Those who are know that such work is not easy and, it is often costly. Jesus attests to that in his next beatitude, as we will see next week. I pray that you find yourself challenged by this and that the Lord leads you, as well as all of us, down the road of making peace and building up a reconciling community of love.

THOUGHT OF THE DAY
“Peace is not absence of conflict, it is the ability to handle conflict by peaceful means.” – President Ronald Reagan
PRAYER
Lord, grant me peace that I may be a peacemaker and counted among your children. Amen.