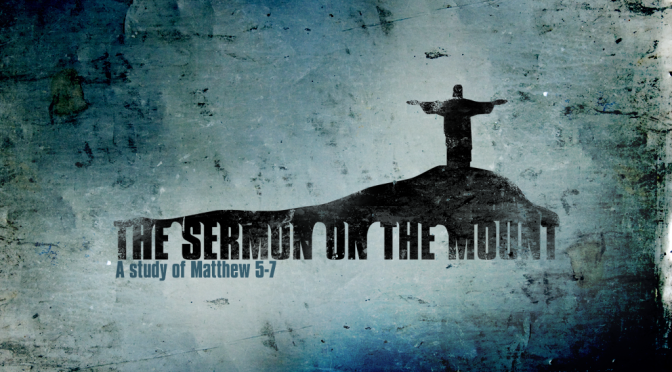 ALSO IN SCRIPTURE
“‘But this is the new covenant I will make with the people of Israel on that day,’ says the LORD. ‘I will put My instructions deep within them, and I will write them on their hearts. I will be their God, and they will be My people.’” (Jeremiah 31:33 NLT)

Jesus prefaces his sermon with today’s passage and, in fact, the whole of Jesus’ message regarding the Law in the Sermon on the Mount is book-ended between Matthew 5:17 and 7:12. “Do not think that I have come to abolish the law or the prophets; I have come not to abolish but to fulfill.” This text has often been glossed over, underwritten, and overstated by various different people trying to make sense about what Jesus is actually teaching.

It is important to note that Matthew’s Jesus sets up his teachings on the law with this statement. Historically speaking, Matthew’s community was following a much adjusted version of Judaism that, to many traditional Jews, didn’t seem a whole lot like Judaism. Even within the church, there was a major disagreement on what it meant to be a follower of Jesus, who was historically a Jewish rabbi. Can anyone follow Jesus and do they have to submit to and follow the Jewish law if they truly want to be one of Jesus’ followers?

Matthew’s community had to defend itself from claims that they were abandoning the ways and laws of Judaism. What’s more, Matthew and his community were mostly Greek-speaking diaspora Jewish Christians who lived in Syria, possibly in and around Antioch. With that historical context in mind, it makes perfect sense that Matthew includes Jesus beginning his Sermon in this Way. Jesus was Jewish and Jesus did not come to abolish or ignore the Law, the Torah, of God as given to Moses.

Yet, as mentioned above, this is only a preface to Jesus’ teaching on the law. Jesus neither denies or delegitimizes the Law, nor does he affirm the status quo. Instead, as we’ll see in upcoming devotions, Jesus shows that he is the fulfillment of the Law. He is not a fullfillment in the sense that Jesus did everything required by the Law without breaking it. It is quite clear in Matthew and the other Gospels that Jesus did break the Law (at least as it was understood by religious leaders his time period).
Jesus does not fulfill the Law in the sense that he provides a new interpretation of it, nor are his teachings a mere summary of the Laws in the Torah. Before I get into how Jesus claims he is the fulfillment of the Law, it is also important to note that Jesus says he not only fulfills the Laws but the prophets. Why the prophets? Because Jesus views both the Torah and the prophets (Joshua-2 Kings and Isaiah-Malachi) as being wholly prophetic and pointing to the end-time fulfillment of God’s reigning Kingdom.

In other words, the Torah (Law) and the prophets point to the coming of the Messiah who was to usher in the Kingdom of God. Jesus, in essence, prefaces his teachings on the Law with this claim: “I have come as a fulfillment of the eschatological promise found in the Law and the Prophets.” Another way that this could be expressed is, “The Law and the Prophets point to me!” Jesus’ use of the phrase, “I have come” (vs. 17) presumes that Jesus had come from and was sent by God.

Then, Matthew’s Jesus follows this up with a word to those Greek/Gentile Christians in his community who believed the Law was irrelevant and were lending credence to the argument of the Matthean community’s opponents that Christians disregarded the Torah. Jesus makes it clear, every commandment remains important. Witht that said, Matthew does not exclude those who hold this view from the Kingdom of Heaven; rather, they are “the least in the Kingdom of Heaven.”

While it is important to get the context behind these teachings, it is also equally important not to miss the overall point Jesus is making to all of his disciples, as well as to his opponents. God’s Law and the prophets both point to Jesus, the Christ, as. God’s eschatological (end-times) promise. Dismissing the Law, as well as upholding it as the end unto itself entirely misses the point. Both polar viewpoints are incorrect because they both completely ignore and pass by the very person the Law points to, namely Jesus Christ. To dismiss the Law as useless, is to do dismiss Jesus Christ. To render the Law to some sort of legalistic measure, is to render the fulfillment of that law as impossible. Today’s challenge is to let go of our biases and humble ourselves to place of student at the feet of the One who is God’s Law fulfilled.

THOUGHT OF THE DAY
“It is not wisdom but Authority that make a law.” – Thomas Hobbes

PRAYER
Lord, humble me that I may learn all that it is you have to teach me. Amen.