“Amram married his father’s sister Jochebed, and she gave birth to his sons, Aaron and Moses. (Amram lived to be 137 years old.)” (Exodus‬ ‭6:20‬ ‭NLT)‬‬‬‬ 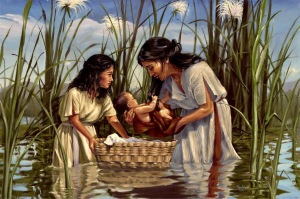 Part 20: Slaves. Wow, we’re up to part 20 in this series and we have just gotten out of Genesis and into the book of Exodus. Thus far, we have talked mostly about prominent people in the Jewish and Christian faiths. We’ve talked about Adam, Eve, Cain, Abel, Abraham, Sarah, Hagar, Ishmael, Isaac, Rebekah, Esau, Jacob, Rachel, Leah, the eleven brothers who betrayed their youngest (at the time) brother, Judah, Tamar, and Joseph.

The ones of those who are not prominent are at least named and a little can be gathered about them; however, I would like this time for us to pause and reflect on a couple of unnamed people. These people were not a people of high status or prominence in life, and they certainly are not given too much mention in the Bible either. In fact, they are barely named slaves who serve only one purpose in the Scriptures: they are the parents of Moses.

We all know the story of Moses, a story that has been acted and reenacted time and time again over the years. From sweeping, classic, epics such as The Ten Commandments to animated musicals such as “The Prince of Egypt”, the story of Moses has been told in so many different ways. In fact, their names and backstory seem to be of little interest to the writer(s) of Exodus. They are not even mentioned until chapter 6, and are only mentioned their in order to connect Moses’ lineage to the tribe of Levi, who was one of the sons of Jacob. In essence, Moses’ parents were important because they connected this “prince of Egypt” to the Jewish people by birth.

But who were Amram and Jochebed? We simply do not know who they were, other than the fact that they were slaves in Egypt and that Jochebed was technically Amram’s aunt. They got married and had Miriam, Aaron, and Moses. We also know that Pharaoh had ordered that all male Hebrew children under the age of 2 be thrown into the Nile and drowned.

Jochebed, in an attempt to avoid her child being murdered in such a horrific way, but the baby Moses in a basket and floated him down the Nile river. Miriam, who was clearly older than Moses, was tasked with ensuring that her brother ended up in the care of the Pharoah’s daughter. This was a dangerous mission, no doubt, but one that she pulled off.

We have no clue what Amram thought of this, or what was going on in their heads, because nothing else is written about them. We can only imagine the horror of thinking their baby son would be drowned in the Nile. Amram lived to 137, according to the Biblical account, but we have no idea if he was alive at this point or not. He’s simply not mentioned and the Bible explicitly names Jochebed as the “woman” who took the action to save her son’s life.

While we do not know enough about these people to speculate on what their character flaws were (which is a running theme of this series), we can instead point to the way the story is told in order to find potential flaws in us. The story only “uses” Jochebed and Amram as a means to an end, namely, to show that Moses was Hebrew and of the tribe of Levi. That serves the dual purpose of showing Moses to be both a Hebrew and the “priest” (as the Levites were priests in ancient Judaism) who was worthy of delivering the Israelites out of bondgage and back into a proper relationship with God. Other than that, they were not considered important enough to the narrative to mention anything further about them.

How often do we do the same? How often do we idolize heroes in our midst, only to ignore the unnamed or barely named, disregarded, sufferers who raised and/or inspired those heroes up? How often do we ride the stories of success on the backs of the oppressed? How often do we focus on the few who rose to prominence (only because they are prominent), to the detriment of those of whom we deem unimportant? Let us not do that. Let us see all people through the eyes of God who created them. Let us view all human beings as both important and sacred.

“The Bible has been the Magna Carta of the poor and of the oppressed.” – Thomas Huxley

Lord, help me to see through reading the Scriptures that you are on the side of the oppressed and the downtrodden and align my heart with you so that I stand in solidarity with them. Amen.