ALSO IN SCRIPTURE
“So as David stood there among his brothers, Samuel took the flask of olive oil he had brought and anointed David with the oil. And the Spirit of the LORD came powerfully upon David from that day on. Then Samuel returned to Ramah.” (1 Samuel 16:13 NLT) 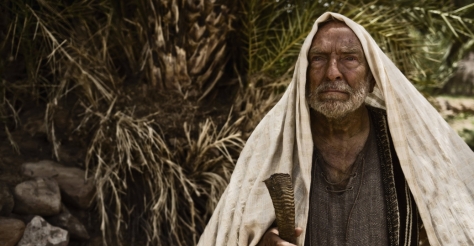 Part 43: Samuel. Have you ever felt like you heard the voice of someone calling you? I have. I remember when I was a boy, my parents had my sister and I go to bed at the WAY TOO EARLY time of 8 p.m. during the school year. Okay, so I now realize my parents were more reasonable then I thought they were then; however, at the time, this was a BIG DEAL for me. Why did I have to go to bed so early? As you can probably tell, I have always been a night owl and still am to this day.

One time, my parents were watching a movie after were in bed. Well, I just wanted to watch it and I couldn’t fall asleep, so I suck to the stairs and laid down so I could peer at the TV screen through the railing at the top of the staircase. At some point, deeply entrenched in the movie, I heard the voice of what I thought to be one of my parents (I couldn’t really tell if it was mom or dad at the time, which is odd now that I think of it) saying, “Todd, go to bed.”

My heart froze in its place and I jumped up and ran to bed. The next day, I sheepishly walked up to my mother and confessed that I had indeed been watching the moving from the railing and that I was sorry for not staying in bed. She looked at me with the most puzzled look on her face. I then asked her if she had been the one who told me to go to bed. She shook her head horizontally, to tell me that she had not told me to go to bed and that she didn’t even know I was up there watching. Later, my dad stated that he had not known either. Yet, I had audibly heard that adult-like voice telling me to go to bed.

I’d imagine that Samuel, much like me, had his heart freeze when he heard the voice of God calling him to be a prophet. Three times he heard that voice and thought it was Eli, the high priest who had taken Samuel under his wing as an apprentice of sorts. Finally, Eli instructed Samuel to say, “Speak, your servant is listening,” as he realized it was God speaking to him.

Samuel, as the Bible informs us, became the next and the final judge of the Israelites. As he would find out, his call kept changing and evolving and Samuel often felt like he was on shaky ground. He served God and his people as faithfully as he could; however, as is often the pattern in the Bible, his children were not spitting images of him or his faithfulness. They, rather, became corrupt and the people did not trust them to be leaders.

This must have crushed Samuel, and he must have felt like an utter failure when he ended up having to give in to the demands of the people and anoint a person to become their king and sovereign, a person he could only hope would represent God rather than his own self-interests. And the fact that his first choice for king was a failure and a realization of his worst fears, certainly did not help. With that said, Samuel did what he felt he must despite all the uncertainty and his faithfulness to God led to the rise King David and the royal lineage that would trace itself all the way to the King of kings, Jesus Christ.

The challenge for us is to learn from Samuel’s persistence despite the uncertainty we face in day to day life. We are often uncertain of how things are going to turn out and we often find ourselves questioning why things are turning out as they do; however, if our hearts remain open to the guidance of God, we will never be led astray. Even when we do make wrong choices, God will still work in us and through us for the glory of God and the coming of the heavenly Kingdom. Have faith, be still and know that God is with you.

THOUGHT OF THE DAY
“In this quest to seek and find God in all things, there is still an area of uncertainty. There must be. If a person says that he met God with total certainty and is not touched by a margin of uncertainty, then this is not good.” – Pope Francis I

PRAYER
Lord, help me deal with the uncertainty and, rather than resting assured in what I think I know, let me rest assured in my faith. Amen.