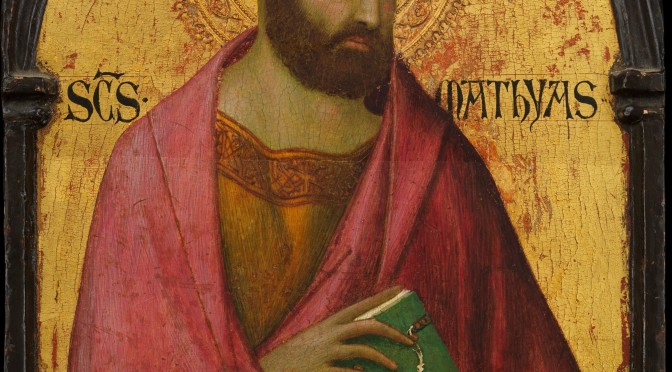 ALSO IN SCRIPTURE
“On the day of Pentecost all the believers were meeting together in one place.”  (Act 2:1, NLT) 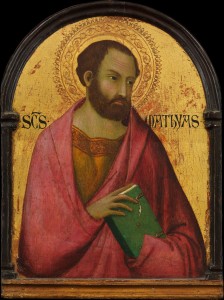 Part 177: Matthias. When looking to secure the future of a movement, one would hardly be inclined to leave it up to “chance”. One would, no doubt, do everything in his or her power to take all of the necessary steps to ensure that all things were in order. If a leader in the movement died, one would choose among the people a worthy replacement for that position. Nothing, if at all possible, would be left to chance.

Yet, when one pays close attention to what the Apostles did at the beginning of Acts, he or she will notice that the Apostles left the replacement of Judas up to the drawing of lots. Judas had killed himself due to the dishonor he felt in his betrayal of Jesus. Too guilty to continue on, Judas tragically took his own life. Need to replace him, the 11 remaining Apostles nominated two men out of 120 of Jesus’ disciples who had assembled to meet.

Yes, that is right, Jesus had far more than just 12 disciples. The 12 were Jesus’ inner circle whom he mentored to continue the movement on without him. From that can be gathered this fact: Jesus knew that he would not always be around to lead his disciples and, as a matter of fact, that was never his plan. From the time he called the 12 until the time he died and resurrected, Jesus had been preparing his disciples to be the Apostles who would carry his mission and ministry forward.

Out of those 2 men, Joseph Barsabbas (also known as Justus) and Matthias were nominated. Then to make the final decision, they drew lots. “Wait,” one might think, “they left the fate of Jesus’ mission and ministry up to chance?” The answer is, no. They did not; rather, they left the decision up to God. They trusted that whoever won out in the casting of lots was being selected by God. That was a sign of their faith and, clearly, something that Jesus must have conveyed to them along the way. It was not their decision, it was God’s.

As for Matthias, he was among those who had followed Jesus throughout his earthly ministry. He was, more than likely, among disciples who witnessed the resurrected Lord before he ascended. It is clear from Scripture that he did not witness the Lord ascend; however, he was among the 12 Apostles who received the Holy Spirit in the Upper Room in Jerusalem during Pentecost.

In another tradition, he traveled to the barbarians and “meat-eaters” in Ethiopia. Again, another tradition has Matthias being stoned to death in Jerusalem. Making a long and disjointed story short, no one really knows what became of Matthias following his being selected as Apostle. Chances are that, regardless of where he took the Good News to, he was likely martyred for doing so.

All of this should challenge us in the following ways. First, how goes it with your faith? Do you have faith in God enough to leave major decisions up to him? Sometimes you may, sometimes you may not? This was clearly the case with the Apostles as well. Sometimes they cast lots seeking God’s will, other times they vied for their own will and way of doing things.

Second, do you take the time to discern what God’s will is for you and/or those around you? Do you prayerfully consider God in your decisions and do you follow God regardless of the cost. Matthias and the other eleven Apostles came to understand Jesus Christ as the Lord and they followed him to the ends of the earth, forsaking all else for the sake of the Gospel. That is what we are all called to do. Reflect on this and challenge yourself to grow deeper in your faith and more faithful in your response to God.

THOUGHT OF THE DAY
“So let everyone in Israel know for certain that God has made this Jesus, whom you crucified, to be both Lord and Messiah!” ­— Saint Peter in The Act of the Apostles 2:36, New Living Translation

PRAYER
Lord, grow me deeper in my faith and more faithful in my response to you. Apart from you this is not possible, but with you all things are possible. Amen.