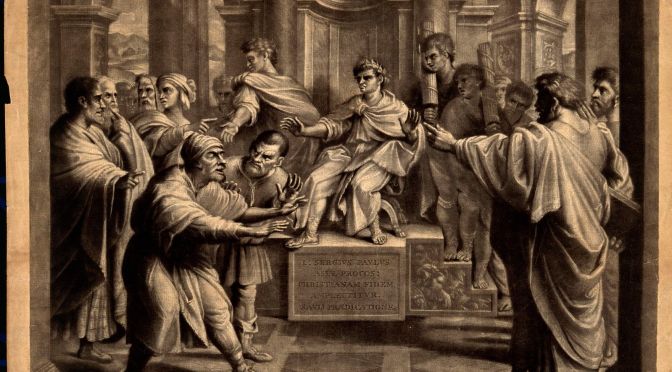 ALSO IN SCRIPTURE
“A false witness will not go unpunished, and a liar will be destroyed.” (Proverbs 19:9)

Part 254: Bar-Jesus. Here is another example of an obscure person mentioned in the New Testament. We don’t have much to go on in knowing who this Elymas was, except what we are told about him by Luke in the Acts of the Apostles. So, in order to pull anything meaningful from this text, we need to first examine what is known.

Elymas is first introdcued as Bar-Jesus, or son of Jesus (Greek: βαριησοῦς, pronounced bar-ee-ay-soos), who is a “magician” (in Greek: μάγος, prounounced magos) and as a “false prophet” (in Greek: ψευδοπροφήτης, pronounced pseudoprophētēs). The reason I am giving you the Greek is because it is important to understanding the implications of who this man is according to the original language the Bible was written in. This Elymas, son of Jesus, was a Jew living on the Island of Cyprus and he was seemingly a spiritual advisor to the Roman governor of that island, named Sergius Paulus.

First, let’s look at Elymas name, if that be his name. In fact, Acts tells us that Elymas means magician/sorcerer/wise man, so it is likely that his real name is not even Elymas. Another important thing to grasp is that Jesus (Greek: Ἰησοῦς, pronounced ee-ay-soos) was the Greek equivalent to Joshua and it was a common Jewish name. Just because this Jewish religious adviser was known as the son of Jesus does not mean he was claiming to be the son of Jesus/Joshua of Nazareth; rather, it simply means that this Elymas was the son of a man named Jesus/Joshua. This man’s name is not what makes him suspect to Paul and Barnabas, nor is it why he’s considered to be a false-prophet.

The reason he is considered to be a false-prophet is, as far as we can draw from the text itself, is because he is falsely advising Sergius to not listen to the words of Barnabas and Saul (who, at this point, is evidently starting to use his Roman name Paul). Instead, he wants the governor to listen to him, as if he is the one truly speaking for God. In terms the title magos, it is not clear whether he calls himself that or not. Magos can be interpreted as magician, sorcerer, or even as wise man. The magi (plural for magos) in Matthew’s Gospel is often translated to wise men as opposed to sorcerers or magicians.

It seems likely to me that this term was given to him for, as a Jew, he would not call himself a sorcerer or magician. If he did, why would a God-fearing Roman governor listen to him? The term was a slight against his character as sorcerers were seen to be deceitful and false. This would seem to being consistent with his being called a “false prophet” by Luke. Thus, by calling him a magos, the author is calling into question his character. He is seen by Luke as a shady, deceitful person who has the ability to “put someone under his spell” with deceitful, yet charming, words.

With that being the best educated guess we can now discuss the conflict. Barnabas and Paul went to Cyprus to preach the Good News of Jesus Christ to the Cypriots. While there, Governor Sergius Paulus heard of them and their miraculous deeds and invited to them to speak with him about this Jesus of Nazareth, of whom they preached. This was did not make Elymas Bar-Jesus happy because it threatened his very position as a religious advisor to the governor. Think of it this way, if Governor Paulus became a Christian, what need would he have for Bar-Jesus who doesn’t accept Jesus Nazareth as the Christ?

Thus, Bar-Jesus began to counter the Christian witness of Barnabas and Paul right in front of them. As a result, Paul called out Bar-Jesus and cursed him with the same temporary blindness that he had suffered earlier on as a persecutor of the Church. Of course, this curse acted more as a “miracle” as it was a witness to the power and presence of God being upon Barnabas and Paul. Thus, the governor instantly became a Christian believer.

I am sure that Bar-Jesus thought he was right. I am sure he felt that Barnabas and Paul were the deceivers; however, deep in his heart he had selfish motivations for believing that. While I am have no reason to presume he wasn’t sincere in his Jewish beliefs, he was also concerned about his status and position and that was, at least in part, his motivation for opposing the Good News.

This should challenge us. How many times have we rejected God’s Good News in order to hold onto our status, our positions, our friendships, our wealth, our jobs, etc.? In this age of political extremes, how many ditch the good news of Christ, or even pervert it, in order to hold on to their political worldviews and agendas? Notice that I didn’t name any specific party or affiliation. That was done intentionally, because it happense across party lines and affiliations. Let us be challenged to be open to Christ’s Good News. Let us be challenged to prioritize it over everything else, lest we find that we too have been blinded.

THOUGHT OF THE DAY
Without Christ, we are like the blind leading the blind.

PRAYER
Lord, have mercy on us, sinners. Amen.