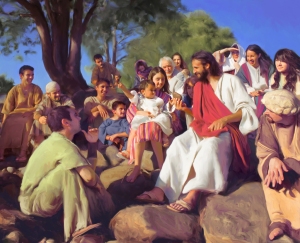 Surely that is not our common experience is it? In an age where meglomania seems to be the key quality to be a world-dominating leader, in a time when groups are beheading and burning people in order to take over land, in a world where violence seems to be the only repsonse to everyone’s problems, it is very hard to picture the meek getting anywhere but six-feet under and long forgotten.

Yet, Jesus gave the multitude surrounding him the beatitude, or blessing, for the meek. Surely, this crowd must have thought Jesus to be completely outside of  his head. While there are many differences between Jesus’ world and ours, there is absolutely zero difference when it comes to the meek and what they inherit. The meek inherit subjugation and, if they’re lucky, death under oppressive and tyrannical rulers.

While it is true that this was the reality for the meek in Jesus’ day, just as it is in ours, Jesus’ audience had a contextual advantage to understanding Jesus’ message in a way that mostly eludes us. Any of Jesus’ Jewish audience would have automatically recognized that Jesus was not making this beatitude up out of thin air, but was turning what was a quote from the thirty-seventh Psalm into a blessing for the meek.

In order to understand what Jesus is saying here, we need to have a better understanding of what is being said in the Psalm 37. Though it is claimed as a Psalm of David, it was more likely written to people who were captive in Babylon, following the Babylonian exile. In verse one, the Psalmist tells his readers to not fret over the wicked. They may have won the battle, but not the war. The Psalmist’s advice to the reader is to trust in the Lord and do good. Those who do will inherit the land. What’s more, “refrain from anger, and forsake wrath. Do not fret—it only leads to evil” (Psalm 37:8 NRSV).

This of course leads us to the extra verses quoted in the “Also in Scripture” section above. Fretting leads to anger, which leads to wrath. Wrath is often violent and evil. The wicked (aka “evildoers”) shall be cut off from the land, but those who wait upon the Lord, those who are meek, will inherit the land. In this context, of course, the land is Judah. The people exiled in Babylon long to go back to it, but the Psalmist says that will only happen through trusting and waiting on God to deliver them.

Jesus, as mentioned above, is specifically quoting this Psalm; however, the “land” he is promising is no longer Judah, itself, but a renewed Earth that will come along with the Kingdom of God. The meek will inherit, in essence, the Kingdom of God. Of course, the word “meek” doesn’t just mean gentle, kind, soft-spoken, and peaceful. The word “meek” also implies humility and/or the knowing of one’s place in respect to God and neighbor. More importantly, “meek” implies a submission to God’s reign. It is through such humble submission that one will inherit the earth.

While the world dictates that violent, brute force is the only way to inherit the Earth; Jesus taught that, in fact, that only secures one’s demise in the end. The only way to inherit the earth is to submit to God’s reign and be transformed by the Kingdom of God within. Once one submits to God’s reign over one’s own life, they have inherited the Kingdom of God within them and will live there lives as embodiments of the Kingdom of God in the world. Eventually that Kingdom of God will triumph over the evil, and the evildoers, and the meek will truly inherit that renewed and heavenly Earth. The question for us all is this: are you meek? Do you submit to God’s rule over your life, or do you submit to the rule and the ways of the world? I pray for God’s guidance for all of us as we begin to truly examine ourselves in spirit and in truth.

THOUGHT OF THE DAY
God has two dwellings; one in heaven, and the other in a meek and thankful heart.” – Izaak Walton
PRAYER
Lord, I submit to your reign in my life. In my meekness, I seek your ways and not the worlds. Amen.