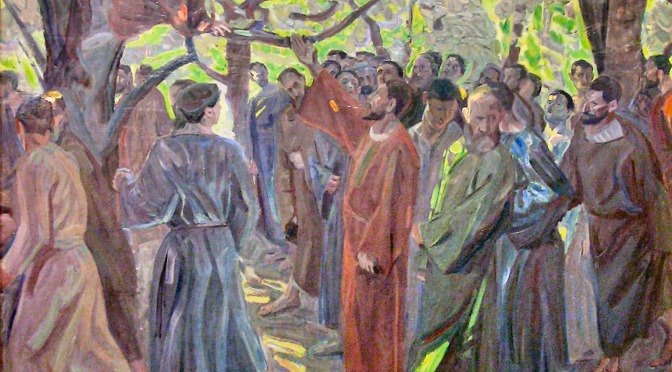 ALSO IN SCRIPTURE
“But when the Pharisees saw this, they asked his disciples, ‘Why does your teacher eat with such scum?’”  (Matthew 9:11, NLT)

Part 218: Zacchaeus. This is one of those accounts in the Gospel of Luke that is very well known. Most people have heard of little Zacchaeus who climbed a tree in order to see Jesus over the crowd. In fact, he’s so well known that there is even a children’s song based on him entitled, Zacchaeus Was a Wee Little Man.

As with all well-known accounts, people easily gloss over the important details of the story. With Zacchaeus, there are number of layers to this account that help us understand what was really going on beyond the story of a short man climbing a tree to see Jesus. Within the first sentence of the passage, we learn the location of Zacchaeus and that location bears with it a whole socio-economic and religious context.

Jesus found Zacchaeus in the city of Jericho. Before we look at Jericho, let us first take a look at Zacchaeus. He was not only a tax collector, but he was the “chief tax collector for the entire region.” Tax collectors were Jews who worked for the Romans to collect taxes from their fellow Jews. To make a long story short, whatever the percentage was expected from the Romans, the tax collector would raise that price even higher so that they could make a profit. Thus, the tax collector was not only being paid for their job, but they were also taking a cut of the taxes the collected because they gouged the percentage that was owed. In essence, the tax collectors were robbing their own people blind and becoming rich off of their desperation. Zacchaeus was doing this very thing to the people of his region and thus, in a word, he was DESPISED by the Jewish people in and around Jericho.

The city of Jericho, itself, was one of the cities of the priests. It was 15.9 miles northeast of Jerusalem and it has been said that 12,000 priests and Levites lived there. Thus, this is a town where many temple elite were living; yet, Jesus does not seek an audience with any of them. Ancient Israel had a culture of honor built into it. For a teach or rabbi to visit the home of someone was a great honor. Instead of honoring one of the elite religious leaders in the city, jesus chose to honor wee little Zacchaeus.

To make matters worse, as was mentioned above, Zacchaeus was a “sinner” of the worst kind. He was in bed with the Romans and was robbing the people of what little money they had. So, when Jesus called Zacchaeus down and invited himself over the tax collector’s house, the people became indignant. How dare him! How could this rabbi associate with such a sinner, let alone honor him by going to his house?!?! This was a major insult to them.

Yet, Jesus paid them no mind. At the feast, while the priests were grumbling, Zacchaeus was so moved and honored by Jesus that he pledged to give half of his wealth to the poor. On top of that, he also promised to pay back 4 times the amount he took from those he cheated. Jesus then blessed his house and called Zacchaeus a true son of Abraham, reminding the people present that his mission was to come seek and save those who are lost.

This is a challenge for us as well. Do we view certain people as being outside the bounds of God’s grace? Do we view certain people as being to classless, or too inappropriate, or too secular, or too sinful to be worthy of God’s grace? Do you harbor any resentment toward those you think have cheated you or others? Remember, Christ came to seek and save those who are lost. In fact, we all were lost at one point and Christ has found and saved us. We should, with Christ, seek out the lost and include them in our fold with the love and blessing of Christ. After all, that is what Christ did and that is what he is calling us to do.

THOUGHT OF THE DAY
“It is not the healthy who need a doctor, but the sick. I have not come to call the righteous, but sinners to repentance.” – Jesus Christ in Matthew 9:13

PRAYER
Lord, forgive me, a sinner. Help me to see other people through your eyes, rather than my own. Amen.