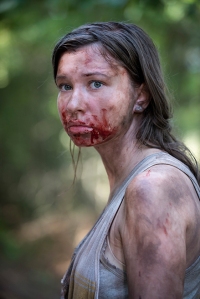 As I have stated on multiple occasions, one of my all-time favorite shows is “The Walking Dead” on AMC. I was just watching the most recent episode entitled, “J.S.S..” I run a pretty tight ship in the “no spoiler zone”, so I will not be making any major spoils to the episode; however, I will be letting you know what the initials “J.S.S.” stand for. So if you are a fan of the show, haven’t seen this episode and don’t want to know what they mean, let this be your warning. Just put this devotion aside and read it after you watch the episode.

In the latest episode, a girl is seen wandering the empty streets. She is the last in her family to survive and she is wandering by day and hiding in empty cars by night. She eats whatever she can get her hands on to survive and looks like a bloody mess from all of the animals, and zombies, she’s had to kill. There doesn’t seem to be much left of her. She looks exhausted, confused, lost, empty, and hollowed out like an embalmed cranium. She is a shadow of her former self and she is just barely surviving. Everywhere she goes, she writes the initials, “J.S.S.”.

As I see it, that is what a lot of us do. We just survive somehow. Day after day, night after night, week after week, and year after year. We just survive somehow. We wander through our lives like the aforementioned girl wandering the zombie infested streets. Every day we wake up, get out of bed, put on our shallow, fake smiles and our “happy face” masks and set out to just survive another long and painful day. In fact, we’ve gotten so accustomed to surviving that it has really, for all intents and purposes, become our sole purpose in life: just survive somehow.

We think to ourselves, “maybe tomorrow will be better,” and when tomorrow comes and goes we think, “Maybe next week will be better.” Of course, next week, next year, next decade, things don’t seem to ever get better and we feel trapped in perpetual survival mode. So we tell ourselves again to “just survive somehow.” Surviving becomes such a terrible and lonely fight and some of us, too many of us, simply don’t win out in the end. Surviving becomes too much for us and we find that it’s better to succumb.

How sad it is that so many people have spent their lives “surviving.” Sadder still is the truth that many people don’t survive at all, but rather become victims of their loneliness and hopelessness. These unfortunate ones never got to see their true worth, they never had a chance to see that there is beauty in this life, and they never had the chance to see that God wants them to thrive, not just survive.

If this is you, if you are just surviving somehow, if you are merely hanging on in your life, then I bring you good news. You are not alone in your struggles. God created you, you are a daughter or a son of God, and God wants you to move beyond surviving to thriving in life. This doesn’t mean that you’ll become rich and permanently happy; rather, this means that you will rise up out of the ashes of survival and into the hope that comes through the sacred community of the Triune God. You will be surrounded by a community of thriving survivors who have experienced God’s hope, healing and wholeness and want to freely share that with you. If this is you, I pray that you enter God’s community and experience love.

THOUGHT OF THE DAY
“The ultimate value of life depends upon awareness and the power of contemplation rather than upon mere survival.” – Aristotle

PRAYER
Lord, I’ve been in survival mode for far too long. Awake in me the desire to thrive in my faith and in my life. Amen.

ALSO IN SCRIPTURE
“Woe to you, scribes and Pharisees, hypocrites! For you are like whitewashed tombs, which on the outside look beautiful, but inside they are full of the bones of the dead and of all kinds of filth.” (Matthew 23:27)

One of my favorite TV shows as of late is called “The Walking Dead.” I’m kind of a late comer to this show, as I am to all shows, and have been catching up on the three seasons that are available on Netflix. At some point, the fourth season will be out and I will catch up on that too, hopefully in time to catch the fifth season as it airs on TV. Needless to say, I am hooked on the show and for good reason.

The Walking Dead is a series that is about the zombie apocalypse. For those of you who are not already aware, zombies are en vogue in today’s society. It used to be that when we talked about the apocalypse, we discussed seven headed beasts, “the antichrist”, or even nuclear warfare. We may have even thought of machines we originally designed to kill our enemies turning against humanity in general and altering their mission to “terminate” all of human kind. Nowadays, when the word apocalypse is talked of people think of the living dead wandering the earth in search of human flesh to feast on. Mmmmm. I apologize if you are reading this while eating.

What I love about the show is that, though on the surface it is dealing with zombies, it really is a metaphor for our world and society today. When we turn on the news we can see lots of instances of “the walking dead.” From our government, to crazed individuals, there are lots of people and institutions that just seem to have lost their way. They were created and/or designed for a specific purpose…but that purpose is dead to them and they are just wandering mindlessly preying and feasting upon others. What’s more disturbing is that, most people, are not fighting against such a state of being as much as they are fighting to maintain their status quo…only to become “the walking dead” themselves.

In this season of Pentecost, we think of the Holy Spirit filling the disciples with new life and a sense of purpose. We hear of the fire that was kindled within them that raged out of control and spread to 3,000 people on that day, which then turned to tens of thousands, millions and eventually billions of people. The church was God’s antidote to the virus that creates the “walking dead.” Yet, from time to time the virus seems to creep into the life of the church as well. Every so often, the Holy Spirit raises up a leader such as Paul, Martin Luther, John Wesley, Mother Theresa, Dr. Martin Luther King, Jr., etc. to go against the status quo and act as an antidote to the virus that is consuming us.

The Holy Spirit is calling you to be an antidote to the Walking Dead virus in the church. The Holy Spirit is calling you to stand up against the injustices, oppression and bonds that the world, including the Church, put upon people. Are you going to be among the countless zombies lurking around in the shadows looking for people to mindlessly feast on, or are you going to be filled with the TRUE LIFE of the spirit and become an agent of God’s Hope, Healing, and Wholeness. Christ is calling us to be in a deeper relationship with him so that, instead of reanimation, we find RESURRECTION and LIFE! Rise up with Jesus, be filled by the Holy Spirit and become an ANTIDOTE that brings life and resurrection to the LOST and NEGLECTED!

PRAYER
Lord, fill me with your Holy Spirit so that I may be guided into serving others and bringing them your Hope, Healing and Wholeness. Amen.