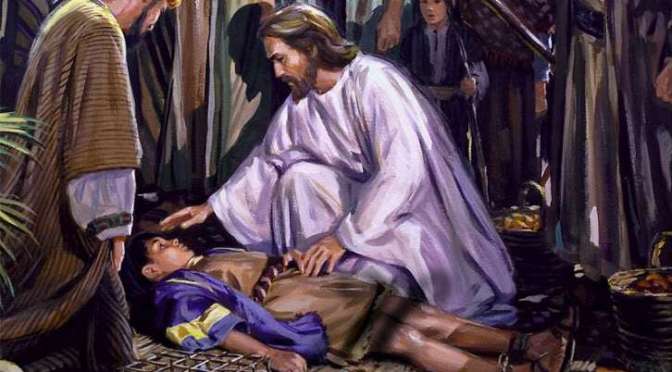 ALSO IN SCRIPTURE
“Through Christ you have come to trust in God. And you have placed your faith and hope in God because he raised Christ from the dead and gave him great glory.”  (1 Peter 1:21, NLT) 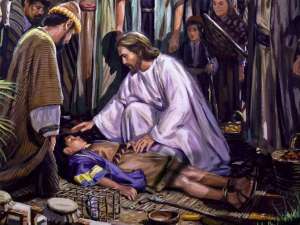 Part 200: Faithless. In today’s Scripture, we have a very interesting account where we get to see both the humanity and divinity at play within Jesus. When we picture Christ in our minds, we see this jovial, nice, guy with a smile on his face and a lamb over his shoulders. He’s surrounded by children as he sits on a rock for storytime. He’s calm and serene; sometimes, he’s even glowing (e.g. halo).

Yet, that is merely a two-dimensional view of Jesus, at best. In today’s passage, we see a wholly different side of the Lord. He heard a bunch of arguing and questioned what that was all about. It  was then that a man, whose son was possessed by an evil spirit, spoke up. He told Jesus that he asked the disciples to cast out the spirit and they simply couldn’t.

In that moment, we see a frustration in Jesus we have yet to really see before this point. Jesus vents out to them, “’You faithless people! How long must I be with you? How long must I put up with you? Bring the boy to me.’”  (Mark 9:19, NLT) This of course, caused the disciples to begin to worry if they Jesus was referring to them. Did the Lord actually view them as “faithless”? Thus, when they were alone, they later asked Jesus why they were unable to exorcise the demon. Jesus revealed that “this kind can be cast out only by prayer” (Mark 9:29, NLT).

In my reading of this, while the disciples sometimes displayed a lack of faith, Jesus was not frustrated with them. He knew they had no way of knowing how to specifically cast out the evil spirit. What’s more, they attempted to, which means that they were NOT lacking in faith. Instead, they were stepping out in it.

What this then reveals to us is that Jesus’ frustrations lay with the people who sought help from the disciples. It is there that we see the faithlessness that Jesus was upset about. The people came to the disciples looking for a service to be performed and, when they could not deliver, they came bickering and griping about it to Jesus.

It was that sentiment that frustrated Jesus. They wanted to see the result before they would believe and, when the final product was not delivered on time in they way they were anticipating, they grew angry. They approached the disciples and Jesus as if they were a means to an end, as if they were some sort of miracle producing side-show. They approached them in faithlessness rather than in faith. Of course, Jesus healed the child anyway, but not before making an example of those who came seeking the healing.

It is this that we are being challenged with today. Do we have a relationship with Jesus Christ? Do we place our faith solely in Him? Do we spend time getting to know him or do we merely seek him out when we need something. Do we see Christ as our ultimate and eternal end, or do we simply try to use Him as a means to some sort of self-gratifying end? Let us truly reflect on this and remember that Christ is LORD. Him, and Him alone, do we serve. Let us do so faithfully.

THOUGHT OF THE DAY
“Jesus Christ is the same yesterday, today, and forever.” – Anonymous (Hebrews 13:8, NLT)

PRAYER
Lord, I believe in you. Help me with my unbelief. Amen.