We, as human beings, have a very difficult time dealing with the unknown. We absolutely desire to be in control and nothing seems more “out of control”, then uncertainty and the great unknown. Recently, two different communities that I serve experienced unexpected and tragic events that left everyone in the dark, confused, in shock, and wondering why such an incident could ever happen. It is in such moments, especially when we are caught off guard, that we begin to ask the question, “Why?”

This makes me think of the film, “Miracles From Heaven,” which tell the true story of a young girl who has a rare, serious, and terminal illness that causes her to not be able to digest food. This, of course, leaves her in considerable amounts of pain most of the time. Her life, at the age of 9 (or so), was relegated to bed rest in hospital rooms. In the midst of it, her family was seeking answers as to what they could do in order to cure her daughter of this illness. Yet, doctor after docter could not even come up with what the illness was, let alone why it was or how they could cure it. One doctor, who was a renowned specialist at the renowned Children’s Hospital in Boston, was able to put his finger on what the disease was; however, with that said, he was also certain there really was no cure for it. All they could do was try to give the little girl pain medicine to keep her comfortable and wait for illness to take it’s inevitable course.

In the midst of their struggle to help their daughter, they turned to their church for spiritual and emotional support. While all certainly intended to provide that, what the family really got was a bucket load of terrible theology. Some congregation members were asking the mother if there was anything she or her husband did, or if there was anythign the little girl did, to bring this terrible illness down on them. The pastor, thankfully, was not a part of this…and did try to support the family, however, the response of some of the congregation memebers was enough to drive the mother further and further away from her faith. What kind of God would punish an innocent little 9 year old because of the sins of her parents? What kind of God would punish a 9 year old girl, whose not even old enough to be held accountable according to Biblical standards, for her own sins?

While, I will not spoil the rest of the film (and I highly recommend that you go and see it if you are able), I will say that THEOLOGY MATTERS. We often think that our suffering and struggles are a part of GOD’s PLAN. We will try to comfort people who are struggling by telling them that “they’ll be okay,” that “things will work out in the end,” and that “this is all a part of God’s plan” in order to “test them” and “help them grow.” Or, more judgmental people will try and speculate on what sorts of wrong people did to “deserve” the things that have befallen them. Both lines of theology are apalling, egregious, and dangerous. What kind of God causes people to suffer in order to help them grow? What kind of God blinds people, cripples them, puts them into gas chambers, or kills their family members as a part of “the plan?” What kind of God gives us “what we deserve?” Certainly not Grace filled God of Christianity.

Just as Jesus Christ did with his disciples, he is calling us to rethink our theology and to be careful in it. God’s plan is not to hurt, punish, or kill people as some sort of twisted means to an end. That never was God’s plan, nor will it ever be God’s plan. People have articulated it that way, even in the Bible, but only out of ignorance. But overall, the Scripture is consistent in what God’s plan is: to LOVE creation and to be present in relationship with it. That is God’s plan. Things happen, circumstances take us by storm, and life hits us in various ways, but GOD’s LOVE for us and GOD’s PRESENCE with us NEVER changes. God’s plan is to be with us and to be with others through us. That is the plan…and it certainly is a MIRACLE when we acknowledge the plan and LIVE INTO IT.

THOUGHT OF THE DAY
“You know what I noticed? Nobody panics when things go according to plan, even if the plan is horrifying.” – The Joker

PRAYER
Lord, even when things do not go according to plan, you are present with me. Help me to acknowledge that and be a witness to your presence in my life and the lives of others. Amen. 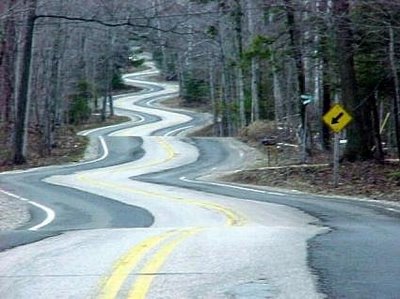 A couple of months back I was watching a televangelist who just happened to be on at the time I turned the TV. I cannot remember which televangelist it was; however, I distinctly remember his message. He was utilizing Proverbs 3:6 and proclaiming that those who submit to God, those who know God and have a relationship with God, those who faithfully acknowledge God will find that God makes their paths straight (NRSV) for them. In other words, bumpy, crooked, twisted, and labyrinth-like roads are OUR doing. The implication is, of course, that if life is hard, if things aren’t going smoothly, if we feel that our path is an obstacle course, then that means we are NOT submitting to, knowing, or faithfully acknowledging God and God’s direction for our lives.

I vehemently reject that notion! Too often I hear people questioning their faith, as well as God’s love for them, because their road is hard and things aren’t going well. Too often the sick are guilted to think they didn’t faith enough or they didn’t pray hard enough when they aren’t healed. Too often the abused think that God is punishing them, or allowing the abuse to happen, because they haven’t been acknowledging God enough in their lives. Too often the oppressed stay in oppressive situations because they feel that God has placed that on them as “their cross”, only to find out that the cross is never, ever removed.

While I do not deny that there is truth to the Proverb, I think that it has been hijacked by those who want to say what it doesn’t. When we look at the Bible, we do simply DO NOT see a God who ALWAYS gives the faithful a straight path. Let’s look at the Exodus. They submitted to God, went out on a limb and followed the seemingly nutty prophet Moses straight out of Egypt with the hopes they would arrive safely, and relatively quickly, to the land of promise. Instead of God taking them the direct route (approx. 372 miles or about a week’s journey, give or take), God led them on a 40 year journey zig-zagging, backtracking, and back again through the wilderness. Yes, the people fell in and out of faith during that journey, but it started off crazy. They cross the depths of a sea instead of going a few miles North to go through shallow water. They go South, through mountainous terrain instead of North, which was the direction of the Promised Land. So, yeah, they were a little frustrated when an entire generation of people died off before they reached what should have been only a week away.

Beyond the Exodus, let’s look at Esther. Was her path straight? How about Jeremiah? How about Daniel? How about Job? Was Job’s path straight? How about Jesus? Look at his life. He invested himself in God and in the people he came to serve. Did that lead to a coronation, to adoration and a straight path to being revered? Nope. His path was anything but straight. It led to being second guessed by his family, misunderstood by his disciples, betrayed by one of his own, rejected by the people he had invested in, arrested by his enemies, and beaten, tortured, and killed by the world he came to save. That doesn’t sound like a straight, “easy peasy lemon squeezy” path to me. Should our theology imply that Moses, Esther, Jeremiah, Daniel, Job, John the Baptist, and Jesus didn’t submit, faithfully acknowledge or follow God well enough? Should we imply that they failed in their faith? Of course not!

Do not be seduced by such conveniently simple, and extremely dangerous, theologies. God never promised us easy, straight paths. What God did promise is that God would never abandon or forsake us on this bumpy journey. God would never forget us or leave us alone. Even if we aren’t always faithful, God always is!!! If we are faithful, then our faith will make us aware of God’s presence. The aforementioned proverb is pointing to that. If we acknowledge God, then our faith in God will show us the way God is leading us. It will make God’s way clear to us. Let us not be seduced by shortcutting around hard-earned understanding with bad theology, let us rather wrestle with God and grow in our faith. Then the path will be made known to us, whether it is easy or not.

“It is a rough road that leads to the heights of greatness.” – Lucius Annaeus Seneca